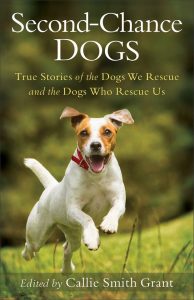 On September 18th, Revell, a division of Baker Publishing Group, released a new rescue anthology titled Second-Chance Dogs: True Stories of the Dogs We Rescue and the Dogs Who Rescue Us. The book features four DWAA members: President Jen Reeder, Denise Fleck, Susan Willet and myself.

Working under the name of Callie Smith Grant, author Lonnie Hull Dupont says this book is similar to the other five collections she’s edited. Second-Chance Dogs portrays “rescue” in many different ways; dogs aren’t just rescue animals from shelters, but may have rescued a human or another dog.

Lonnie notes, “I want people to feel some happiness after reading these stories – and some sense that sometimes things pull together in a wonderful way. Sometimes in the end, the story is really about the human. That’s fine, too.”

Some of the anthology’s 30 contributors are professional writers with a long list of publications in books and magazines. Some are trying to become that. “There’s something wonderful about getting a New York Times bestselling author in my books. But it’s equally exciting to provide a writer’s first publishing experience,” she says. “Although some editing is always necessary, for me, the storyteller needs to be a writer.”

Jen Reeder, a Denver-based freelance journalist, attended the BlogPaws/CWA panel in 2016 in Arizona where she learned of the anthology. When Lonnie invited her to submit an essay, she sent “Gotcha Day” – a piece focusing on Jen’s adoption of their family dog, Rio. Reeder says, “Rescuing our Lab mix changed my life. I also love writing essays. I thought it would be fun to see him get coverage in a book.”

Reeder’s essay highlights the importance of the rescue and rehoming of animals. On the anniversary of Rio’s sixth “Gotcha Day” – the day Reeder and her husband brought Rio home – they returned to the shelter, where Jen presented the staff with the Maxwell Medallion she’d received in the DWAA Annual Writing Competition in the category of “Best Magazine Article: Rescue.” As Jen emotionally recalls, “I told them (and the readers) about his work as a therapy dog and that saving his life made a huge difference to strangers and to my family.”

Based in Georgia, award-winning author Denise Fleck, the Pet Safety Crusader™ has taught more than 15,000 animal-lovers to make a difference in the life of an animal through Pet First-Aid, Senior Pet Care and Disaster Preparedness books and classes. She’s won three Maxwell Medallions, one for her illustrated children’s book Don’t Judge a Book by its Cover, the first in a series that teaches kids, and reminds adults, not to judge an animal by its age, fur color or breed, but to look beneath the coat to find the treasure inside. Denise also serves as President of the Grey Muzzle Organization (aiding senior dogs) and on the Board of the Emma Zen Foundation (pet oxygen masks).

When an email found its way to Denise, she jumped at the chance to submit “Finding the Way Home,” an essay about a stray blonde Shepherd that suddenly appeared one day in her girlhood neighborhood. Despite some familial resistance, Denise prevailed in having Blondie become a beloved family member. In turn, the dog returned her kindness in a very special way. According to Fleck, “It’s a story of true blue canine loyalty and love!”

Susan Willet’s award-winning original stories, poems, and humor have appeared in print and online, including her website LifeWithDogsAndCats.com. Based in New Jersey, she shares her home with three dogs and four cats—all rescues.

In 2016 Susan moderated a panel “From Blogger to Author: Getting Paid for Your Words, from Freelance Writer to Book Author” for the Cat Writers’ Association at the BlogPaws pet social media conference in Arizona. Susan recalls, “Lonnie (Callie) was one of the speakers, as was Lisa Begin-Kruysman, both of whom have become good friends and mentors.” The following year, Susan met up with Lonnie at BlogPaws again, and was asked to submit a story for her rescue anthology.

“All of my dogs (and cats, and other animals) were or are rescues. Because I write a lot for my blog, and because I’m currently working on a memoir that features my pets, I have a collection of stories that range from jotted-down ideas to blog posts to chapters. My challenge was to pick just one idea from among the many.” In the end, Susan selected two stories and sent them to Lonnie (Callie). She was thrilled when she learned both would be included!

“What’s Wrong with Your Dog?” is the inspiring story of a dog disfigured after being hit by a car. “The Sound of Home” is the story of Susan’s rescue dogs Lilah and Jasper and how they came into the Willet household at a time when they needed them most.

Lonnie and I met while serving on a publishing panel at the BlogPaws Conference in Arizona. During a break she mentioned her upcoming anthology and I relayed the moving story of how our dog Teddy entered our lives in the wake of Hurricane Sandy. She asked if I’d be interested in contributing to the anthology. The result was “Surrender,” a story of a dog-blogger who after writing about fostering ended up keeping one of her “subjects”! It’s a story that resonates with many and Lonnie thought it would fit right in. I’m also thrilled to be contributing to her upcoming horse rescue anthology and happy for my fellow DWAA members who join me as contributors to Second-Chance Dogs.

As an author and an editor, Lonnie understands that readers never tire of stories of the right person and the right beast meeting for some good reason and that we can’t be fully human sometimes without having those wonderful non-humans to help us. “At Revell, we have a saying: ‘If they cry, they buy.’ And it’s certainly true for me.”

Lisa Begin-Kruysman is a New Jersey-based blogger and author. The author of five books, her writer’s platform is inspired by her writing and work on behalf of National Dog Week; an American tradition celebrating 90 Observances in September – established by the Captain Wm. Lewis Judy, co-founder of the DWAA.

Available wherever books and ebooks are sold.
Second-Chance Dogs: True Stories of the Dogs We Rescue and the Dogs Who Rescue Us