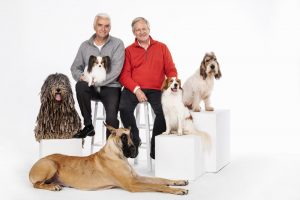 “The National Dog Show Presented by Purina®” will be hosted by award-winning TV personality, author and Broadway star John O’Hurley (“Seinfeld,” “Dancing with the Stars”). Returning to offer expert analysis is American Kennel Club-licensed judge David Frei, who has officiated at dog shows worldwide and, alongside O’Hurley, has co-hosted the competition since its inception in 2002. NBC Sports correspondent Mary Carillo will report from inside the show ring, and former U.S. Olympic figure skaters Tara Lipinski and Johnny Weir will offer behind-the-scenes access as digital contributors.

“For 17 years, the ‘National Dog Show Presented by Purina®’ has been at the forefront of the purebred dog world,” said O’Hurley. “I’m proud to be a part of a legacy that not only celebrates such a rich history of dog breeds, but also being part of a tradition that entertains everyone from 4 to 94.”

Two new American Kennel Club-sanctioned breeds will be included in this year’s competition – the Nederlandse Kooikerhondje (sporting group) and the Grand Basset Griffon Vendéen (hound group) – bringing the total recognized breeds to 192. Since 2003, 45 new breeds have been introduced to the event.

A beloved holiday tradition for families across the nation, the broadcast reached more than 22 million viewers last year. Over the last two years the telecast has delivered its two biggest audiences in its 17-year run on NBC. The National Dog Show is part of a five-hour block of family programing on NBC, offering the country’s 65 million pet-owning households a full afternoon of fun entertainment while raising money for canine-related causes. In its unique format, the Kennel Club of Philadelphia offers an open environment for the esteemed event and remains one of the only “benched” dog shows, displaying all 2,000 competing purebred canines to the visiting public.

In celebration of Thanksgiving and the National Dog Show, Purina is inviting pet owners across the nation to share why they are thankful for their pet. From Nov. 9-25, for every unique post shared on Facebook, Twitter or Instagram that includes @Purina and #DogThanking, Purina will donate $1 (up to $25,000) to Tony LaRussa’s Animal Rescue Foundation Pets and Vets program. This amazing program helps pair shelter pets with veterans coping with PTSD, traumatic brain injuries, anxiety and other service-related challenges as they transition back to civilian life following their service.

For more information on the “National Dog Show Presented by Purina®,” visit: http://www.nationaldogshow.com

Breed descriptions and more information can be found at http://nds.nationaldogshow.com/event-info-groups.php