The Dog Writers Association of America (DWAA) is pleased to announce the four winners of the DWAA Writing Competition’s Junior Writer Award:

A Passion for Helping Pooches by Jayson Kimberly, 12 (Category: 10-12)

The DWAA Junior Writer Award is sponsored annually by Karen Petit, an author of children’s books, for writers under the age of 18. The purpose of the award is to recognize and encourage young writers who exhibit talent, resourcefulness, dedication and integrity in their writing about dogs and dog-related topics. Winners receive $400, a DWAA Maxwell Medallion (named for renowned dog writer Maxwell Riddle) and lapel pin.

Normally there is just one winner, but the contest coincided with the inaugural year of DWAA’s Young Writers on the Web, a program that offers mentorship and publication to writers under 18. The contest experienced such a surge in entries from children and teens that an anonymous donor stepped forward to offer matching grants in four age categories. All four winning entries were originally published by DWAA as part of Young Writers on the Web.

“It’s so inspiring to see such talent for writing and love of dogs in the next generation,” said Jen Reeder, DWAA President. “I hope these awards help motivate these four remarkable young people – and their peers – to keep writing!” 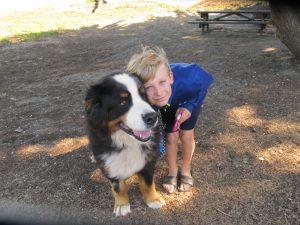 In “Atlas,” 9-year-old Nikolas Anthony Klimenko touchingly describes the endearing qualities of his late Bernese Mountain Dog, Atlas. One memorable line reads, “His joy, happiness, and love were as contagious as pink eye.” It’s a moving tribute to a beloved dog. (https://dogwriters.org/junior/atlas/) 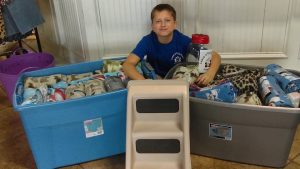 “A Passion for Helping Pooches” by 12-year-old Jayson Kimberly is a first-hand account of the boy’s efforts to raise money and supplies for shelter dogs through two programs he created: Leave It For the Pooch and Pennies Four Paws. “When I first saw Booker in a Facebook post, he was in bad shape,” the article begins. “His leg was bloody, and he looked very sad. He was a stray who had been attacked by other dogs and shot with a pellet gun.” Kimberly raised money for the foster dog’s surgery and follow up care – and (spoiler alert!) Booker went on to be adopted! (https://dogwriters.org/junior/a-passion-for-helping-pooches/) 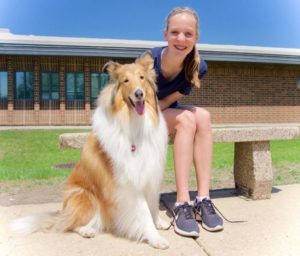 “Full Circle” by 13-year-old Daly Dodsworth recounts the ripple effect of kindness. After a comforting visit from a therapy dog named Sophie while hospitalized with Type 1 diabetes, Dodsworth later had the chance to follow a therapy dog team at a nursing home. “As we walked in, the faces in the lobby lit up, just like mine had when I had been the one receiving the visit,” she wrote. (https://dogwriters.org/junior/full-circle/) 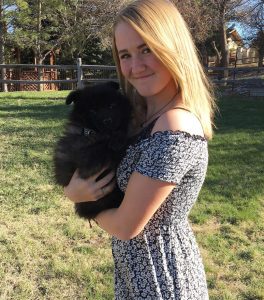 “What I’ve Learned from Smudge, Lola, and Dewey” by 16-year-old Kendle Rae Frank ruminates on the diverse lessons her dogs have taught her. “Overall, dogs have shown me how incredible life is. The world is a messed-up place, but knowing how pure and special dogs are makes it more bearable. They have a zest for life that can melt the strongest of hearts.” (https://dogwriters.org/junior/what-ive-learned-from-smudge-lola-and-dewey/)

Mara Bovsun, the award-winning journalist, author and editor who launched DWAA’s Young Writers on the Web and mentors participants, said she enjoys working with everyone who has contributed to the program, including the winners.

“These youngsters demonstrated so much talent and discipline in how they chose words, structured sentences, and built narratives,” Bovsun said. “But even more striking was the way they used language to convey the deep love they have for dogs, without cliché or sentimentality. It was a joy to work with such promising young writers and I look forward to the program’s second year.”

The winners can accept their prizes on Sunday, Feb. 10, 2019 at the DWAA Awards Banquet at the Hotel New Yorker in Manhattan. The event will feature keynote addresses from NBC correspondent and host of Animal Planet’s “Dog Bowl” Jill Rappaport and radio host/journalist/author Steve Dale of Steve Dale’s Pet World.

“The torch is being passed to the next generation. I’m so grateful to Mara Bovsun for spearheading Young Writers on the Web,” said DWAA President Jen Reeder. “She is so passionate about nurturing writers of any age, and she really shines when working with young people. We are so lucky she stepped forward to provide mentorship to these budding dog writers. Congratulations to the winners!”

The Dog Writers Association of America is the most recognized professional writing association devoted to dogs. Founded in 1935, the DWAA has grown from eight founders to over 500 members, including journalists, authors, bloggers, publicists, photographers, illustrators and media personalities. Under the umbrella of the human-canine bond, members cover dog competitions, health, training, rescue, pet fashion, veterinary research, working dog organizations, animal welfare legislation, fundraisers and many other topics. For more information, visit: dogwriters.org.