Part One—Dreams of a Cheese World

Once upon a time on planet Earth, the Boy sang the National Anthem at the San Francisco Giants game. And with a wink and a nod at the “rockets’ red glare,” the Boy was at peace. He knew Atlas was chasing squirrels on the planet Marz. 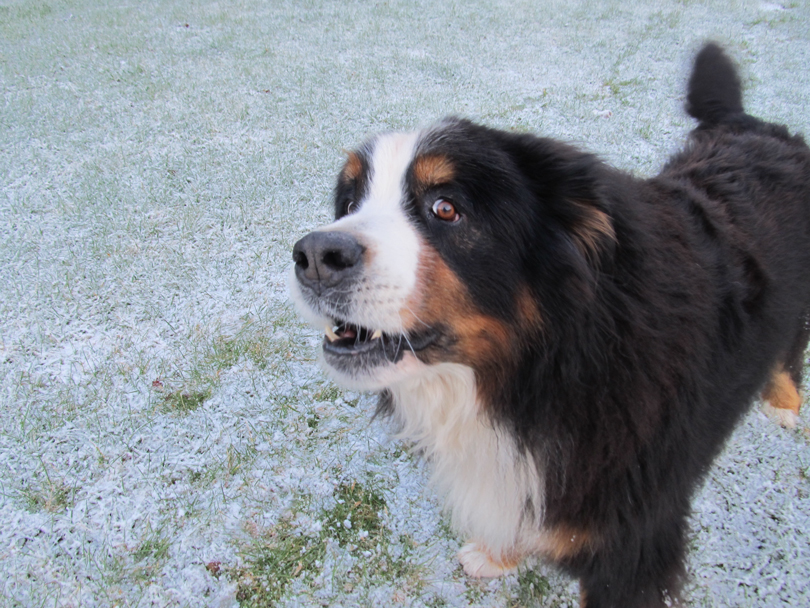 Atlas was a gentle giant with a happy spirit and peaceful soul, but he was also very peculiar. He had a passion for exploration, especially the sky and planets. Marz was his preferred planet because it was undiscovered and it was the color orange. That is the color of his beloved cheese, and therefore his favorite color.

On Earth, there was a boy, a boy who loved adventure as much as he loved Atlas. Most days they would romp and play. The Boy and Atlas always had smiles, and they loved to hear stories.

All spring, the Boy, Mama, and Atlas would sit under the huckleberry shade tree. They would snuggle, read books, and soak in the scent of fresh roses in bloom while gazing at the sky. Then, they would head to the nearby forest to hike, dream, and discover. Atlas would demand pets from people passing by. The forest was full of lakes, redwoods, ferns, and squirrels. Atlas loved to chase squirrels, but they would always run up trees!

When they came to Nikolas’ Outlook, an outcropping of rocks overlooking giant redwood trees, Atlas would gaze at the sky. He was wondering if Marz had great lakes, giant squirrels, and vast land without trees where the squirrels could find shelter.

Little did Mama know that Atlas was secretly planning to get to Marz and that the Boy would help him. 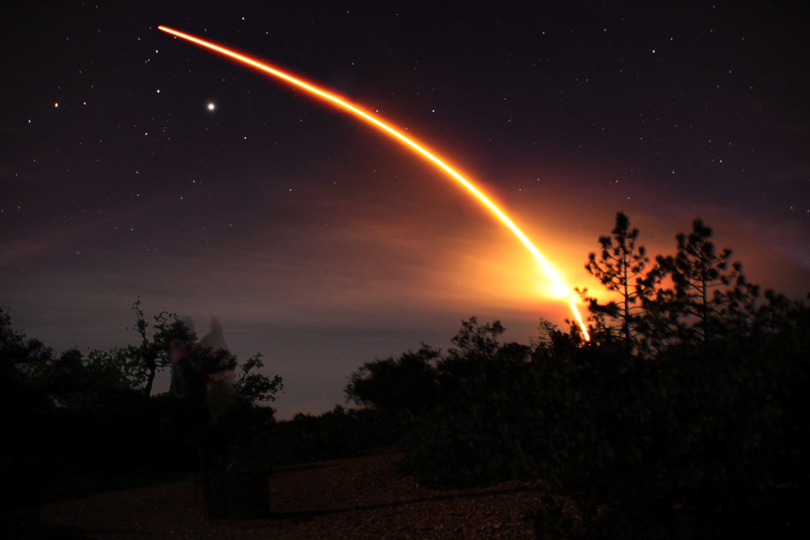 One day, under the shade tree, Mama was reading a story to the Boy and Atlas about rockets and planets. The wind was slightly blowing, and the scent of roses filled the air.

When he woke, he knew he had to go—off to Marz, off to uncharted and untouched territories. He needed to find lakes and squirrels to chase without trees to run up.

He thought of the wonders of being the first dog on the planet Marz. But how would he get there? What would he bring? Oh, the Boy of course. The dog loved the Boy more than anything, even cheese. The Boy loved the dog just as much, so of course, he agreed to go on the journey.

But they still didn’t know how they’d get there.

Then, one day Atlas and the Boy overheard Mama on the phone discussing an upcoming rocket launch to Marz. The launch would take place in Southern California, not Florida, as usual. “Rockets’ red glare!” The Boy and the Dog looked at each other and knew the dream was about to come true. 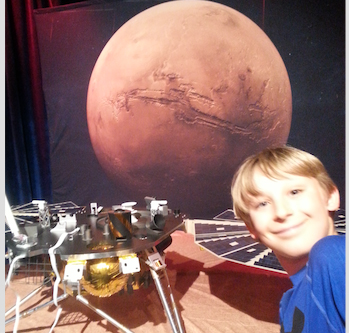 All they’d have to do was get onto the Air Force base and slip on the rocket.

In gleeful spirits, Atlas and the Boy started their adventure. They lived on a mountaintop, so down the slope they went, walking, romping, and singing their way to the bottom. By then, their six legs were worn out, so they decided to hitch a ride.

A lunatic man named Roberto picked them up. Roberto has a passion for food, music, and his Volkswagen Corrado. And he loved an audience. Oh! The stories he told, all full of peace, love, and crazy-good Karma.

But his stories and the gas ran out at the same time and the three wanderers were stranded, looking for a new way to travel. They went separate ways, but not before Roberto offered advice on the mission to Marz.

“Keep your eye on the sky and never stop dreaming,” he said, “for dreams are what life is made of.”

Then, Roberto was off to hitchhike to the beach in Mendocino.

Fortunately, the car had stalled near a small teaching airport. Atlas and the Boy scoped out the scene and came up with a plan.

When a pilot was about to take off, they snuck inside the cockpit and sat under the pilot’s seat. Atlas loved feet! He couldn’t stop licking them. The pilot giggled, but since he was a new pilot and had to concentrate, he figured he’d have to find out what the sensation was later.

When the pilot got up to use the restroom, as pilots sometimes do, Atlas locked the cockpit door and turned the plane in the direction of the Air Force base.

Whoo hoo! Atlas loved to be free in the air! But the Boy was worried. He did not know how to fly or land a plane.

Atlas and the Boy opened the cockpit door and let the pilot back in. Then, Atlas ran to the rear of the plane, sniffed around, and found two squirrel suits. He and the Boy quickly wriggled into them.

One, two, three, they jumped!

They descended, eye to eye with raptors and birds. Floating through the air was surprisingly peaceful. As they slowly approached the earth, they smiled at each other, because they knew it was going to be OK.

Suddenly—BLOP!—they landed, but not on the ground. They had fallen right on the back of a horse! Off they went bouncing, galloping, and trotting on top of this wild creature. Whoa! They couldn’t think straight, and they couldn’t figure out how to stop him.

Then Atlas grabbed the reins with his teeth and pulled with all his might. The horse bucked, and the Boy and Atlas went soaring through the sky, over a giant barbed-wire fence and right onto the Air Force base tarmac.

They took deep breaths to calm down and get their bearings.

No one saw the Boy and his big dog enter the base. It was Cinco De Mayo and the crew was celebrating and living in the moment. The scientists were in deep thought, as scientists usually are, intent on inspecting memos and last-minute engine work.

So, unnoticed, the Boy and Atlas slipped onto the rocket and found a quiet passage to snuggle in while they waited for the launch. Oh, the love between the two.

Meanwhile, at home Mama had not noticed her two loves were missing. She was busy ironing the Boy’s school clothes. She thought when the Boy becomes the first astronaut to be stationed on his favorite planet, Marz, she would not have to iron school clothes anymore. It made her a little sad.

“Why is it so quiet?” Mama wondered. “They must be playing their favorite game—‘Blast off’—in the Manzanita forest.” She knew they would be back by suppertime.

“Ten, nine, eight, seven, six…” Atlas and the Boy awoke to a countdown. Was this it or were they dreaming? Had they really made it on the rocket?

“Five, four, three…” Oh dear! They looked at each other, hand in paw together.

“Two, one…BLAST OFF!” The rocking and rolling were intense. Their heads felt like they were in a washing machine.

Suddenly, the rocket was quiet and peaceful. They peered through the small window and saw a giant orange sphere.

“Great Scot! We actually did it!” said the Boy. “We are not dreaming!”

Then the vibrations came again, and before they could think, the rocket had landed, and the door flew open. Atlas crouched back on his haunches and pounced out of the space ship. In the distance, he saw giant crater lakes and squirrels, lots of squirrels without trees to hide in!

At that moment the boy knew Atlas would not get back onto the rocket, not even for his favorite cookies, not even to see Mama again. He had discoveries to make.

Across the nearest lake, the Boy saw a tiny black speck. The Boy was curious, as the Boy always was, and he decided to see what it was. But when he got there, it was gone.

Part Five—Eye On the Sky

The vibrations started again, signaling the rocket was going to take off to Earth. The Boy knew they needed to get on.

He told Atlas it was time to go home.

“I love you dearly and will always be in your heart, but I must stay,” Atlas said. “There is too much exploration to do and discoveries to be found, and there are squirrels, squirrels without trees to hide in just as I dreamt. One day you will come back to Marz, and I will be here. I will send you messages, so pay attention. And remember, keep your eye on the sky and never stop dreaming, for dreams are what life is made of!”

The Boy was crying. He knew he had to get home for supper or he would have to go to bed early. The Boy also knew Atlas had dreams and was a great explorer and had discoveries to make. He also knew that they would one day meet again on Marz.

Atlas had given the boy as much love as he could while on Earth. The Boy and Atlas gave each other an enormous hug, a gigantic smile, and a kiss.

Then the Boy got into the spacecraft and buckled in. He was worried about the shaking he would have to endure without a paw to hold. Then it began, whipping back and forth. During liftoff, he thought he felt a wet sensation on his toes. Was it Atlas, licking his feet?

When the shaking stopped and he could think, the Boy noticed his hand was warm and holding a paw.

“But how? Atlas stayed on Marz,” he thought.

Then he noticed it was a much smaller paw. He turned to look next to him. What did he see? A ball of soft dark hair and a wagging tail.

“This must have been the tiny black speck I saw across the lake,” the Boy said. That tiny fluffy black speck was a puppy—a puppy that loved cookies, a puppy that had a mischievous gleam in his eyes.

They zipped through the atmosphere, slipped off the Air Force base, traveled through fields, airports, in cars, and up the mountain. The Boy and puppy made it home just in time for supper.

What would the boy call this puppy? Marz, of course!

And, at home during a warm delicious dinner of cheese fondue, Mama smiled and welcomed Marz to the family! 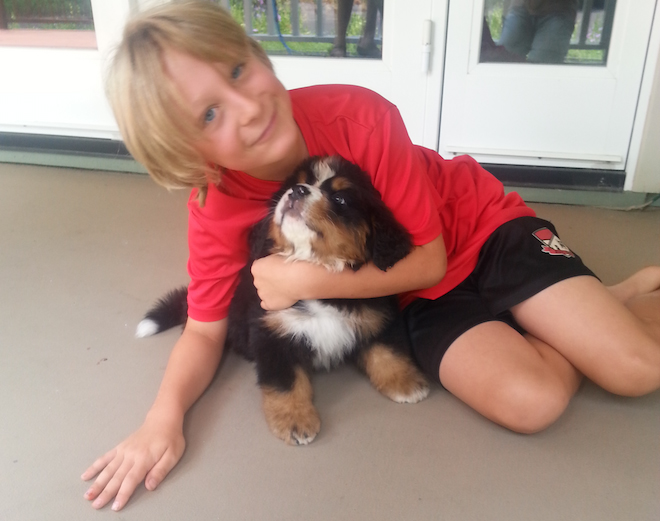